Visit any Civil War re-enactment event and you will find women sporting dresses in colorful calicos – those small floral or geometric all-over patterns that sometimes make your eyes spin. All that color can’t be you might think. But, in fact, calicos were a featured item in dry good ads in period newspapers and adorned Civil War ladies in multitudes of photographs from the time. [To see some of these photos see my Pintrest Board.

So how were calicos made back then?

First you needed the coloring agent or dye. Cotton is a particular challenge to dye. Richard Gibson in his 1861 book The Art of Dyeing All Colors on Raw Cotton or Cotton Waste characterizes the process as “forced and unnatural.” If cotton could talk to the dyers and manufacturers, Gibson says, this is what it would say:

“You fools! You think you can convert me into Wool by coloring?” Don’t you know I have no natural affinity for color. You know you cannot wet me without violence in boiling and then you cannot dry me without roasting; so let me alone! go away! use Wool like sensible and honest men.” (p. 10)

A variety of materials were used commercially in the United States for mordants and color agents in this period. Sumac, acacia (Cateche), logwood, chalk, lime, copper sulphate (blue vitriol), nitric acid, soda ash, lye, lead, salt, tin, iron sulphate, indigo, fustic, and sheep dung combined in various combinations produced colors on cotton ranging from black to lavender and yellows to olive greens, but no satisfactory reds the closest being madder which was very expensive. [Note: Directions for preparing these and other dyestuffs can be found in Louis Ulrich’s 1863 Treatise on the Art of Dyeing Cotton and Wool.) 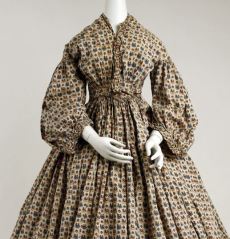 However, in 1856 William Henry Perkin discovered how to make mauverine from aniline, a derivative of coal tar, setting the stage for a booming industry in chemical dyes. These were not immediately accepted in the United States. Writing in 1860, Edward Parnell in A Practical Treatise on Dyeing and Calico Printing comments that many chemists believed that these coal tar dyes would not be a practical dyeing agent.

Despite this negative view, coal tar dyes quickly replaced natural dyes which were far less colorful. Synthetic dyes were not manufactured in the United States until 1867, so during the war period these dyes were imported from France, Germany, and England while traditional dye methods continued to be used. 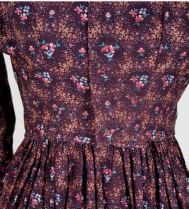 Second, you needed a way to print the design. In the 1860s as today designs were printed on cotton using engraved copper rollers. By varying the depth or textures of the engraving a light and dark shade of a color could be produced in one inking, for example, a red and a pink. To make the dye stick to the roller a thickener such as gum Arabic, china clay, or rice starch was added.

All this effort went into producing the colorful patterns highly favored by women during the Civil War years. The following video from the Kent State University Museum shows some of the wonderful dresses made from cotton in this period.

One thought on “They Wore Printed Calicos”