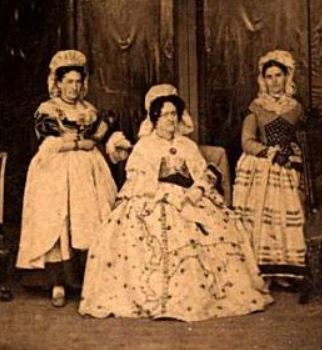 If you were a well-to-do lady living in New York in April 1864 and a member of the Union League Club House, you might have found yourself deep in preparations for the Metropolitan  Fair. Impressed by the successes of the Sanitary Fairs in Chicago and Boston in raising money for the care of wounded soldiers, New Yorkers set out to create an event worthy of their city. The goal was to make it “democratic but not vulgar” “popular without being mediocre” with something for everyone to buy. “The men doubted the success of this effort, but it was the faith of the women that made it what it was.” In fact organizing and running these huge enterprises to raise money was one of the few venues where women could demonstrate their intelligence and entrepreneurial skills.

In 1867 a report on the fair, The Record of the Metropolitan Fair 1867, dedicated to the “Beneficent Ladies of New York “who had worked so hard to make the event a success, was published by the Sanitary Commission. This extraordinarily detailed book is a rich source of information for anyone interested in life during the Civil war period. The fair displays so carefully described in the book encapsulated what people thought showcased their lives at the time. A brief listing of some of the departments gives an idea of the range of cultural topics covered:

Many of these areas featured handwork done by the women organizing the fair. In addition, there were numerous booths set up by local communities, businesses, and foreign countries as well as a cattle show with its star-feature – a 3602 pound white ox.

To stock the fair, thousands of letters were written. Contributions to the fair were solicited from all parts of society from the farmers to the trade unions to the literati of the day. Barnum gave a week’s proceeds. The public school children of New York City collected pennies. The Colored schools raisng the most. Gifts and exhibits were sent from as far away as Lisbon and Rio de Janeiro. Hamburg Newcastle sent a shipload of coal. Italy sent mosaics. When there was not enough articles for an area, the women made them themselves.

Held at the 22nd Armory 14th and 6th Ave, the fair outgrew the allotted space, and structures had to be built out over the sidewalks and into the streets. Temporary buildings filled Union Square.

One of the most interesting displays was the Knickerbocker Kitchen. Here is a description of it.

The presiding geniuses of this realm of old-fashioned and homely enjoyment, were certain ladies whose ancestors figured in the chronicles of the Nieuw Nederlandts, and who held to the traditions of their fathers as far, at least, as it is possible to hold to any thing in this changing world of New York. Dressed in the robes of their great grandmothers, they ruled the array of sable waiting women, and sat at the heads of tables where were dispensed the Dutch dainties that now are hardly known otherwise than historically. There lies before us now a photograph, — the modern art preserves many old things from fading out of existence, — a picture of a lady in the wedding-gown that was brought from Holland two hundred years ago for a bride of her family. The silk of which this robe is made might still stand alone in its stiffness, though its original white has been mellowed by time into a soft and creamy tint, and the great brocaded vine that straggles over the fabric presents the hues of antique tapestry in place of the vivid colors it wore in the days of Peter the Headstrong. It was in something such guise that stately dames in the Knickerbocker Kitchen sat at tables where were set forth such viands as would have delighted their ancestors. The bill of fare was simple; not quite so limited as that which the historian describes as common to the reign of Wouter Van Twiller, but nearer to that than to the complexities of the modern cuisine. There were two meals: lunch at eleven o’clock in the morning, tea at five in the afternoon, with long opportunities between and after for stragglers. There was one table where a little circle all of true Dutch descent, loved daily to gather, and indulge in old-fashioned sociability over ham and head cheese, spiced beef and veal, rullichies, waffles, (not the French gavffre, by any means,) olykoeks, krullers, and the many preserves and pickles that are so nearly lost to our present civilization. Such mince and apple pies were to be had here as the whole city elsewhere could not afford, and such good humor prevailed as is not yet forgotten by those who took lunches and teas at the Knickerbocker Kitchen. Dinners were not in this place — that was a private meal in the golden days of the Dutch dynasty, and was not to be made public here; but teas were so solidly furnished as to satisfy the cravings of the degenerate modern appetite, even when they usurped the dinner hour; so what with the abundant fare, the good humor, and above all the associations clustering around the Kitchen, —play kitchen as it was,—it was continually thronged, and excited a gentle enthusiasm different from any feeling called up by any other department of the Fair. We called it a play kitchen; but it entailed serious work upon those who insured its success. We think at this moment of two ladies whose strength gave way under the burden of unremitting attendance and toils. One was dangerously ill for weeks after the Fair; one is an invalid to this day. But their labors were labors of love, of happy enthusiasm, and, as a consequence, there was a sort of genial influence about the place that amounted to fascination. Not only did this affect those whose early recollections were tinged by lingering Dutch customs and traditions, but all who had learned to love that simple, generous people, through the pages of their historian, the veracious Diedrich Knickerbocker. His spirit was present to many, and a cordiality that was near to jollity was not without its effect upon many more. One leading journal that accorded one notice to the Curiosity Shop, and two or three each to the Arms and Trophies Room and the Art Gallery, gave mention of the Knickerbocker Kitchen on eleven out of the seventeen or eighteen days of the Fair. What better proof of its popularity could be wanted? The only complaint recorded against it is that it was not large enough to accommodate the crowd which flocked there; but then that difficulty was the inevitable attendant upon popularity. We have had to speak of it in relation to other departments, and have generally found that such a trouble has so many compensations, that we dislike to treat it as a real grievance.

Although the wind blew and rain poured down for most of the seven days of the fair, the organizers declared it an unqualified success, raising thousands and thousands of dollars for the care of wounded soldiers.

If you lived during the Civil War period, how might you have contributed to one of the Sanitary Fairs?