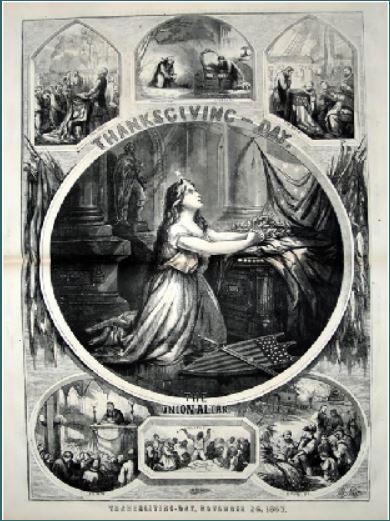 Thanksgiving had been celebrated in America from the time of the Puritans, and soldiers had taken the tradition with them when they went to war. In 1863 President Lincoln declared November 26 as a national day of “thanksgiving and praise to our beneficent Father who dwelleth in the heavens” in response to a letter from 76 year-old Sarah Hale editor of the Lady’s Book.

Even then eating a good meal was part of the Thanksgiving tradition. Naturally families wanted to send food from home to their soldiers in the field. In 1864 there was a massive civilian effort to gather food for the 120,000 soldiers and sailors besieging Richmond. Donations came from all over the country. $50,000 was raised, an estimated 50,000 turkeys were needed. Ladies’ groups sent cigars and apples.

But in 1863 things were more disorganized. Because of troop movements the food boxes didn’t always arrive in time for the actual celebration. Charles Engle of Vestal, New York, a private in the 137th New York, got the box from his wife Charlotte in December, but was glad of it. Here is what was in it (spelling is as in original Note: Charles’s diary is available at the Binghamton Public Library).

You wanted to know wheather that box had ben opened or not. I am the only one that opened it and I had a good job of it it was nailed so solid. I guess your pa nailed it. I got them socks and everything was all right in its place and the papers on just as you put them on. You sead on your letter you was agoing to send another box. If you do you must direct it to Washington. We had to march shortly after we got the other box sowe dident have the good of it as we would had if we hadent had to left it but
it done me a good deal of good. That musterd come good on the march. I would
put it in water and use it for drink and that peper I think a good deal of. I
make sort of a stew of hard tack and pork and that peper is just what I want to
make it good. I luged all I could when we started. I took all the saucage and
20 onions and the most of the cakes and some of the butter. I had a heavey
load. If you send me another box you may send some of them poore fried cakes.
They taste so good down here. You may send me some more peper but I dont want
you to go to to much trubel for me. I can get along without it but if you do
send one you had better not send to large a box for we shant have eney winter quarters and we may have to march just about the time I get the box.

2 thoughts on “Thanksgiving during the Civil War”